Tryout dates: July 17 & 18, 2017 at 7:00 pm both days at Stopher Elementary A completed physical packet and tryout fee is REQUIRED to to participate. Part of the packet is getting a signature notarized. There will be a notary available at tryouts if you are unable to get the signature notarized beforehand. All

The boys soccer team recently celebrated the conclusion of their season at the team banquet.  This season’s team showed great improvement. According to 2nd year head coach Caleb Riley,  “The future of EHS soccer is bright.  Our team was younger in 2016 than in 2015 having lost 12 seniors, but we were better in 2016

Tuesday, September 20, 2016 7:00 PM Kentucky Country Day AWAY 1 Eastern High School HOME 3 Game Recap The Eastern soccer team welcomed back the 1996 State Championship soccer team to recognize 20 years since their historic accomplishment. The team was less welcoming to the boys from KCD jumping to a strong first half lead 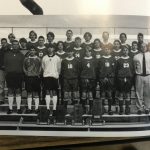 On Tuesday, 9/20, Eastern’s mens soccer team has a HUGE district soccer game.  The team will take on KCD at 7pm at home. The game holds weight for two major reasons. This game will recognize Eastern’s best ever soccer team, the 1996 state champions.  Coach Tim Chastonay led his team on an incredible run that climaxed